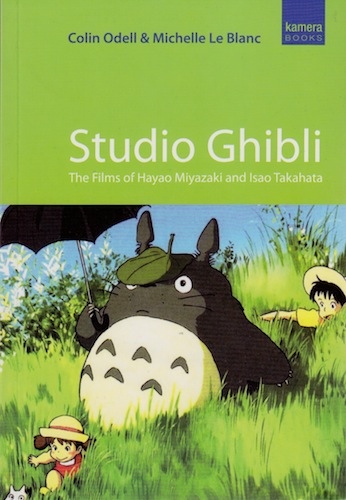 Ever since watching the great movie My Neighbor Totoro I am in love with the movies from Studio Ghibli. They have a great quality to them, very different from western cartoons. I have seen most of them, and now that we will be visiting the Studio Ghibli museum in a few months, I felt I had to read this book to learn more about Ghibli and it’s creators Hayao Miyazaki and Isao Takahata.
The book covers the careers of Miyazaki and Takahata, with a short piece about their work before Ghibli and how they came to found Studio Ghibli. It tells a bit about their lives, and where they take their inspiration from. Most of the book covers the Studio Ghibli movies, starting with Laputa; Castle in the Sky, and ending with Ponyo. It gives a short summary of each movie, with more details on how the movie was received both in Japan and the rest of the world, and what makes the movie special. In the last few pages shorts and other Ghibli projects are also mentioned.
As much as I love Studio Ghibli, this book was a disappointment. There was no consistency in the book. The parts of each movie had no general direction, jumping from one thought to another in every sentence. Some movies were linked to others, but not to the rest, without explanations. Some movies feature many Japanese traditions, and this was mentioned, but just when you think more explanation is coming, another subject is taken up. Most of this information I could have gotten from websites. Also, I would love to have know more about Hayao Miyazaki and Isao Takahata, and the other people who made Studio Ghibli great, and Studio Ghibli itself, more of a history book of the Studio than this list of movies. Oh, and Tanuki aren’t raccoons, they are raccoon dogs… Three out of five stars, but that’s mostly because I like Ghibli.