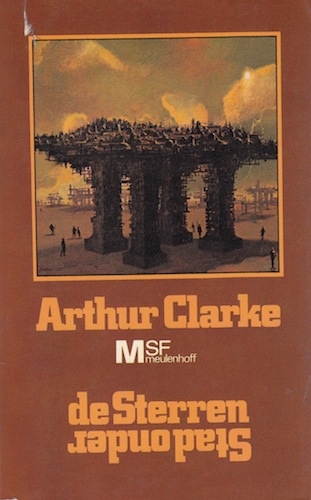 Another classic science fiction story, this one from my dad’s collection. Even though I have only read 2001: A Space Odyssey by Arthur C. Clarke before, he is already on my list of science fiction writers I like and want to read more from.
This is the story of Diaspar, a city on Earth a billion years into the future. The city is huge and completely self-containing, in fact, the rest of Earth is nothing but a desert. The people in Diaspar live completely reliant on the Central Computer. Everything in the city, including furniture and food is created on the fly by this computer from patterns stored in its vast memory-banks. The people live a thousand years, after which they are stored in the memory-banks to be reborn in the future. The people have an immense fear of outside Diaspar, because of the threat of the invaders which drove humanity into Diaspar, and leaves them alone on the condition they never venture out again. In this city, Alvin is “born”. Alvin is unique, he has no previous lives, and no fear of the outside. His curiosity and refusal to accept things as they are mean big changes for the future of Diaspar.
Because Alvin is unique, we discover the city and the world along with him. He is close to us in his manners and way of thinking, which makes the story very accessible. Slowly we discover Earth, and the history of Earth, and the way forward for humankind. I loved the sense of mystery and discovery in this book, and the pace which is fast, even though there is not much action going on. A great what-if science fiction book, five out of five stars.