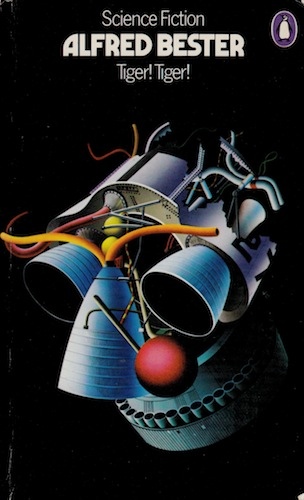 After reading The Demolished Man last week, I put Alfred Bester on my list of must read science fiction writers, so when I saw Tiger! Tiger! (or, The Stars My Destination), I just had to get it. And I wasn’t disappointed.
This is the story of Gully Foyle, a nobody living in a future where mankind has learned to jaunte, or teleport. Teleportation is only possible on the planet, for a maximum of 1000 miles, if you know the exact location and look of the place you are leaving and going to. The discovery of this technique has changed the world, relationships, communication, trade and wealth so much that a war has started between the inner planets (Venus, Terra and Mars) and the outer satellites (moons of Jupiter, Saturn and Neptune). In all this Gully is trapped in the wreckage of the spaceship Nomad, trapped in a supply closet, trying to survive, which he has been able to do in great danger for the last six months. When he finally gets out he is a changed man, a man on a mission. He and his mission are set to change the future of the galaxy forever.
This book was one of those classic science fiction stories I love. It tries to imagine the future, and does a pretty good job. Jaunting means that mankind finds no need for technical tools for communication, everybody tells everything in person. Space travel is easy and possible. It also philosophizes about the consequences of all this, and the new developments because of Gully. A great story, with the only draw back being that it should have been longer. Four out of five stars.