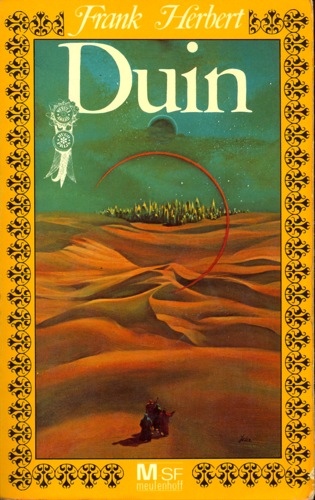 This is one of the books from my father’s collection. I have had it on my shelves a couple of years now, but now, with my new reading resolution to read more award winners, I had to read it. The book was originally published in 1965, my edition is the Dutch translation from 1978.
The story is that of the Atreides family, a noble family living in the galaxy. It is 20.000 years in the future, and while mankind lives among the stars on strange planets, the society is strangely backwards. Computers and robots have been outlawed, instead the society has mentats, humans trained as computer replacements, The Guild takes care of mathematics, and the order of the Bene Gesserit who try to control the mankind by long (loooong) term breeding projects. The galaxy is ruled by an emperor, has many noble families, a guild and the landsraad all influencing politics and daily life. Anyway, the Atreides are lured in a trap by the Harkonnen family and given the planet Dune or Arrakis to rule. From Arrakis comes the spice/melange, essential for life everywhere, very expensive, hard to get and addictive. The Atreides try to survive the trap. Meanwhile, several prophecies and plans come to head with Paul Atreides, the son of the Duke, who turns out to be a lot more special and powerful than everybody thought.
When reading Dune I kept being reminded of the science fiction of Iain M. Banks. The book isn’t science fiction in the sense of technology. Yeah the people travel through space, but have no robots, computers, technology, longevity etc. Daily life itself is very backward, with nobles and an emperor and without democracy or equality. Banks has some books like that, more focussed on the story and how it comes together than trying to impress the readers with what he thinks of the future. Dune hardly shows its age (excluding robots and computers was a smart move) and is a very good story still. Five out of five stars.