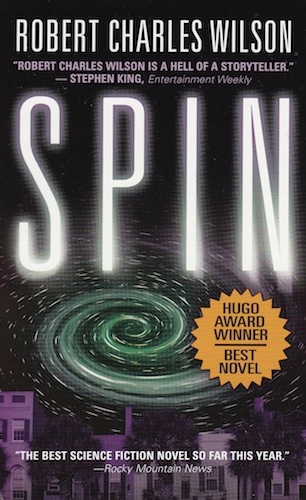 I have had this book, a Hugo winner, on my shelf for over a year now, and now that I have read it, I wish I had read it sooner. It is a wonderful science fiction story, which has two sequels already which I can’t wait to get and read.
It is the day after tomorrow, and all the stars disappear. Soon it is discovered that the Earth is encapsulated in a shield that keeps out everything, starlight, moonlight, sunlight. An artificial sun keeps the Earth alive. In the book we follow the twins Jason and Diane Lawton, and their friend Tyler through their lives. They are teenagers when the shield appears. Jason, who is smart and being groomed as an heir to his father’s business, and who makes solving the shield his only job in life, Diane who loses herself when the shield appears, and Tyler, the son of their housekeeper who will be a doctor and Jason’s closest confidant. Over the next thirty years the world, mostly through Jason, tries to figure out what is going on and how to solve it. One of the first things they figure out is that time outside of the shield moves a lot faster than inside. Soon Earth won’t be habitable anymore, despite the shield.
I loved everything about this book. The story of the three main characters and how each deals with the shield differently. The story of what the shield is, who installed it and what it is for. The story of what happens when time moves a lot faster in space than on Earth. It all integrates great in the book, which tells the story chronologically, with chapters of the far future spliced in between. Even though the future is pretty bleak, the story never got very depressing, there is always hope. A very deserving Hugo winner, five out of five stars.