Dubbelster by Robert A. Heinlein 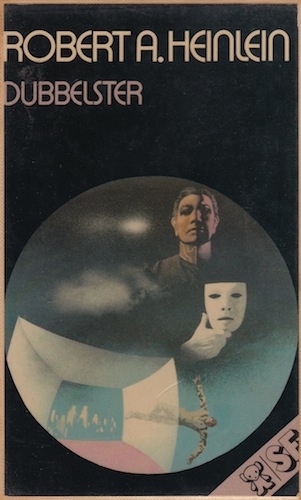 In an effort to read more award-winning books, and even more (classic) science fiction, I picked Double Star by Robert Heinlein as my first read of 2012. It is the oldest unread Hugo winner I own, and even though I have 8 books by Heinlein on my shelves (or in boxes, because the shelves are overflowing), I had never read anything by Heinlein.
This is the story of Lorenzo, an actor. It is the future, and mankind has met the Martians, Venetians and other aliens. We have colonies on the moon and live and travel to the planets. There is one great human empire, ruled by the figure-head Emperor Willem (yes, of Orange, great to see our royal house do so well in the future). Lorenzo is contacted to do the acting job of his life, which leads him to a nest of Martians (who he can’t stand) and to a meeting with the emperor himself.
The book was written in the fifties, and in some ways shows its age. The only woman is an in-love-with-her-boss secretary, and computers are nowhere to be found (slide rules are still going strong). And except for aliens and space travel, the book isn’t really science fiction. It is more about politics and could have taken place on earth, where the aliens are people from a different culture. But all this doesn’t matter if you keep it in mind. It is a very enjoyable novel, short but good. Four out of five stars.