An Artist of the Floating World by Kazuo Ishiguro (OBE, FRSA, FRSL) 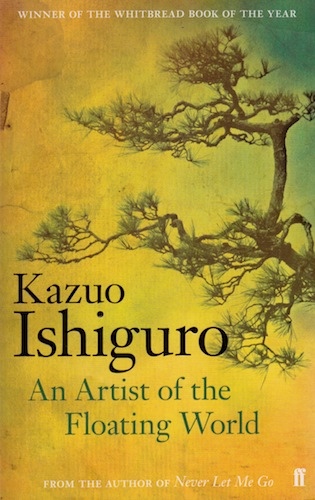 My last book of 2011 is An Artist of the Floating World by Kazuo Ishiguro. It is the story about and told by a Japanese artist just after World War II, who is coming to terms with his role in the war and Japanese nationalism.
The main character, Ono, is an old widow living in Tokyo. He tells the readers about the struggle to find a good husband for his youngest daughter. While he tells this story, we as readers find out about Ono’s life and career, and the different way the younger generations look towards what he has accomplished. He was a very respected artist, and now the view on his work, which was nationalistic, has changed, and also the view towards elders has changed. Slowly Ono comes to terms with this, and the changing world.
The “Floating World” refers to the world of pleasure before the rise of Japanese nationalism, and the world in which Ono was trained. He says that with his later works he wanted to fight against this superficial world, with a few rich people and many poor. It takes him some time to realize that what he has done, or worked for, wasn’t all good.
Like the other Ishiguro books that I have read, I loved the language and the story telling. His works have a slow rhythm to them, part of it is also about the feeling it gives you it seems to me. I really enjoyed this work, and the story. Four out of five stars.