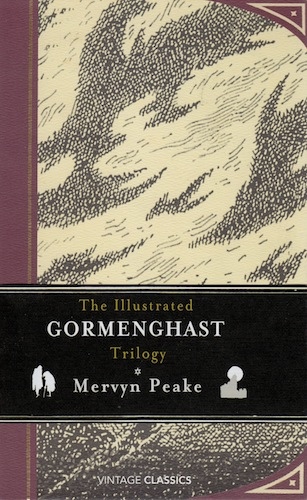 Last summer I watched the BBC series “Faulks on Fiction”, where, through four themes (hero, lover, snob, villain) Sebastian Faulks talked about British literature. One of the books mentioned there, and which I have seen come up on LibraryThing every now and then, was Gormenghast, by Mervyn Peake. After spotting a nice hardcover illustrated edition last summer, I put it on my wish list, and dear Sinterklaas brought me the book a couple of weeks ago.
This edition includes ‘Titus Groan’, ‘Gormenghast’ and ‘Titus Alone’. The first two books take place in Gormenghast, a huge castle and landed area where the Groan family has ruled for 76 generations. The life on Gormenghast is filled with ritual and tradition, and change is impossible. In this world, Titus Groan is born as the seventy-seventh Lord of Gormenghast. The first book, while it caries his name as the title, covers just the first couple of years of his life, and is more about other people, like his sister Fuchsia, his aunts, his father, the famous villain Steerpike and the life on Gormenghast. The second book covers the teenage years of Titus, and also takes place on Gormenghast. The last book covers Titus away from Gormenghast, and the ‘outside’ world.
The writing style of Mervyn Peake was something I really had to get used to. The story seemed to be more about the setting of the mood, and there (initially at least) isn’t much action in the story. Many pages cover mere minutes, and the descriptions are very elaborate. After I finished I read online that this work can be described as surrealistic, and I can agree. But when I allowed the book to set the pace, instead of trying to rush ahead to find some action, I really enjoyed it. I have the feeling a lot of the story has an alternate meaning, which is confirmed by just reading the Wikipedia pages on these books), but just as a book, it is also very good. I give it four out of five stars.