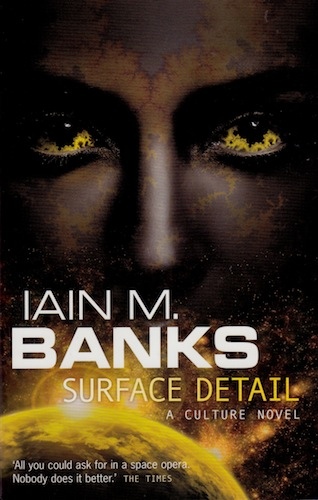 In Iain M. Banks Culture Universe, somewhere very far in the future, it is normal to make a back-up of yourself, your mind. If something definite would happen to your body, this means that you can be remade from the back-up, in any shape or form desired. There are also many virtual worlds where these back-ups can live without bodies. So essentially you are immortal, even though your body dies. For some species other than the culture, this concept is daunting, and to cope with this, they have fitted it into their existing belief structures. For people who “die” in those species, there is a virtual afterlife where they can live on. But how fair is it to give everyone a shot at a fantastic, everything-is-possible afterlife? What about the murderers, the villains, the crooks? Those species that felt that way have created virtual heavens and hells.
This book, like most Banks science fiction novels, follows several different story lines, that come together wonderfully at the end. We have Veppers, a rich business man who owns half a world and thinks himself to be quite something. We have Lededje, in essence his property and slave. We have the virtual war between the anti- and pro-Hell factions, a war to decide if the Hells should be destroyed. We have the Culture, who seems to have an opinion in this war but tries it’s “Culturally” best to remain neutral. We have other level 7 and level 8 species who seem to be involved in the war. And we have a real risk that the war will move from the virtual to the Real.
In the beginning of the book it took me a little while to get into it, because I was tired and busy, and it took some focus to get into the right frame of mind to grasp all that was happening. The descriptions of the experiences of two of the characters actually in one of the Hells were pretty graphic and made me a bit queasy sometimes, although I guess that was the point. Like I said, in the end it all came together great, and while I would have liked to see more Culture, I really liked this book.