The Gunslinger by Stephen King 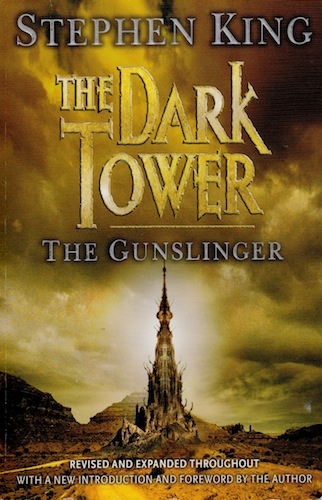 When I bought (many) books on our last vacation to England I bought a lot of first books in series that everybody seems to love. I bought the first parts in the Discworld series, The Chronicles of Thomas Covenant trilogy, Malazan Book of the Fallen series and The Dark Tower. This is the first part of The Dark Tower, a fantasy series written by Stephen King.
Because this book is so different from the horror that King normally writes, and because people are raving so much about this series, I found it hard to know what to expect. But I think this has been a good thing, because it is hard to describe this book. It follows Rolland, a gunslinger, who is following The Man in Black. It takes place in a world like ours, but (to me) it was unclear if it is a parallel world, a dystopian future, a different planet. Some things come from our time (they sing Hey Jude, and one character knows New York), but all in all this world is very different. When reading it I found it hard to find orientation points on which I could anchor my experience with this book. This meant that it felt more like an experience, like an introduction to set the mood, than a full-fledged book one of seven. I am intrigued and want to read more, four out of five stars.