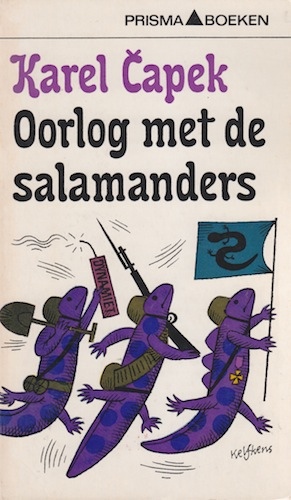 In my quest to read more classic science fiction I couldn’t leave out Karel Capek’s War with the Newts. I have no idea how I know about this book, because when I look at the lists of best sci-fi books and the awards it has won, it is not that famous. But it is good. This book was published in 1936, but it doesn’t show its age. It could have been written recently and set in that time.
A captain who is travelling in the seas of Indonesia discovers a bay where according to the local people, devils live. His pearl-divers, also Asian, are terrified, but the captain is intrigued. He discovers that the ‘devils’ are in fact salamanders or newts that live in shallow salt water. They are pretty smart, and soon the captain teaches them to dive for pearls, language and defense (against the sharks, who eat them). A company is started that exploits the newts as pearl divers, and later as workers at the coast and under water. Harbors are expanded, coastlines are grown, and the newts multiply. They are pretty smart, so how long will this last in balance?
The book is told from many different view points, and also through minutes from meetings and articles from newspapers and magazines. In this way, this reminds me of books like World War Z and Robopocalypse. It feels surprisingly modern. The only qualm I have is that the ending feels… tacked on. The story goes, and in the next to last chapter life for the humans looks pretty bleak. But in the last chapter the writer has a discussion with his conscious in which he philosophizes about how humankind could survive. With my modern reading background this feels unnecessary. All in all a great book, and highly recommended. Four out of five stars.