The Throne of Fire by Rick Riordan 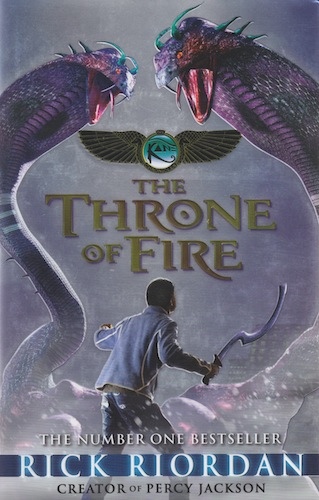 Ever since reading the Percy Jackson series I am addicted to Rick Riordan’s books. I know they are meant for young adults, but they are fun reads, with lovely integration of Greek and Egyptian mythology and kid heroes. This is the second book in the Kane Chronicles, focussing on Sadie and Carter Kane and the Egyptian gods.
It is three months after the events from The Red Pyramid. Sadie and Kane are training new recruits in their Brooklyn safe house, when Carter hears from Horus that they have only five days to save the world. They have to revive the sun-god Ra who hasn’t been the ruler of the gods in millennia. Meanwhile the snake of Chaos Apophis is rising and wants to throw the whole world into chaos.
It is a simple fun, adventurous read. A lot of action happens really fast, and a lot of monsters and gods show up. I have no idea how kids like these books, but I like them. Sometimes I don’t believe that Sadie is supposed to be 13, and Carter 14, not only because of the heroism they display, but also because of the way they handle relationships, grief and living on their own. I have no idea if kids are really this mature, or if Riordan just wrote miniature adults. Anyway, another fun Riordan book, four out of five stars.