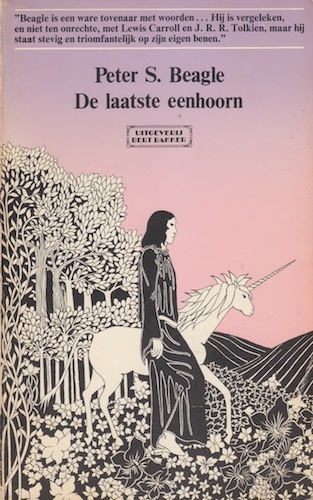 I have never seen the movie “The Last Unicorn”, but I had heard of it, and I knew that the book was supposed to be better. I found the book a couple of months ago at a second-hand shop for only 50 cents, so I had to have it. When I mentioned I was reading it on one of the LibraryThing talk forums, people were jealous I got to read it for the first time.
Did it live up to the expectations? Yes, it sure did. It is a fantasy story about the last unicorn, who, when she hears that she is supposed to be the last, goes on a quest to find out what happened to the other unicorns. On the way, a wizard and a woman join her cause to go to a depressing land with a depressing king and a fierce monster. In essence it is a classic fantasy/heroic story. We have a unicorn, a prince, a beautiful girl, a curse, love, despair, and all those themes. But it is written with a lot of wit and humor, which makes this a very funny and great read. Short but very sweet, four out of five stars.