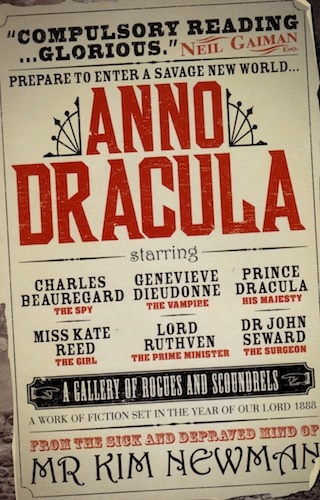 What if, at the end of Bram Stoker’s Dracula, the group led by Van Helsing doesn’t manage to kill Dracula? What if, instead, he stays in England, and charmes the most wanted widow of them all? What if he marries Queen Victoria and becomes the Lord Protector?
That what this book is about. We are in London in the late nineteenth century. Dracula is effectively ruling England, and vampires are very common. It has become fashionable to turn, and most of life takes place at night. Van Helsing is beheaded, and other members of his group are trying to stay out of sight as not to incur the wrath of Dracula himself. Meanwhile, a killer of low vampire whores in Whitechapel is drawing attention, not only of Scotland Yard, but also of the Diogenes Club and of course Dracula himself.
Not only the characters from Dracula appear in this book, also characters from other books, like Lestrade, Mycroft and the Diogenes Club from Sherlock Holmes, Jack the Ripper and Inspector Abberline, Joseph Merrick, Oscar Wilde, George Bernard Shaw and many others. So many others in fact, that a 15 page section is included as to where all the references come from. The story was a fun read, both exploring what would happen with a vampire like Dracula in charge, and what and who Jack the Ripper could be. It is a fun pulpy read, with nasty non-sparkly and some sophisticated vampires. Four out of five stars.