Smoke and Mirrors by Neil Gaiman 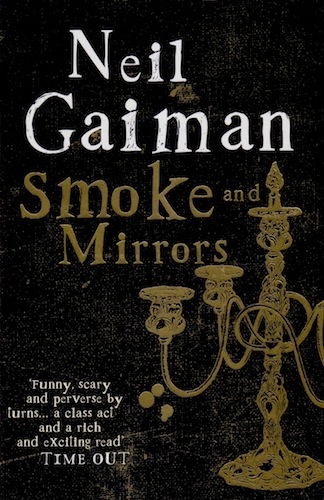 Ever since discovering Neil Gaiman last year, I have bought and read every book he wrote. During our last trip to England I picked up the last one I still missed in my collection, Smoke and Mirrors. This is a collection of short stories and poems with various subjects. One is about Snow White, told by the evil Step-Mother. Except, in this story she is not so evil, and Snow White is not what she seems. Another is about a murder mystery in the land of the angels. Several stories have Lovecraft and the world he created as a base. And several deal with sex and the power and disease that comes from it.
As with all story collections, I liked some, but not all of what I read. Some of the stories had a bit more sex in them than I liked. The poetry style stories went over my head, I feel I would have ‘gotten’ those stories better if they were prose. Then again, most stories were wonderfully fantastic. I love how the ideas are both based on myth, legend and fairy tales and still very original because of the different views that Gaiman has on the subject. Not as good as his novels, but still worth three out of five stars.