A Dance with Dragons by George R. R. Martin 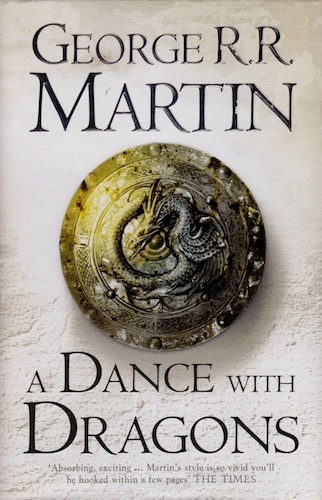 After a long wait (a couple years for most, only 6 months for me) this is the fifth part in the fantastic A Song of Ice and Fire series. There is not much new to say about this book, if you have read the other four parts, you know how this one is. These are the characters you know and loathe.
This part takes place at pretty much the same time as part four, A Feast for Crows, but contains the characters that were missed there. As always with George R. R. Martin, you can’t be sure that the dead people are dead, and the living people are actually alive. It took me a bit to get into this book, both due to the size and the depressing story (a lot of bad stuff happens, and not a whole lot of good). Another reason I couldn’t get started was because I knew that after nearly a 1000 pages, there still wouldn’t be a conclusion to any of the story lines, and there would be a long wait ahead for new material
But then the story and the characters gripped me again. I think the brilliant TV show helped me, those characters were cast so well, especially Tyrion. In this book I would say that Tyrion, Daenarys and Jon are the main characters, but we also hear about Arya, Cersei, Jayme, the Freys, Dorne and almost all of the Seven Kingdoms and the Free Cities. It was so great to ‘see’ them all again. There are some big twists and turns, nothing is certain, and I can’t wait for part six. Four out five stars.