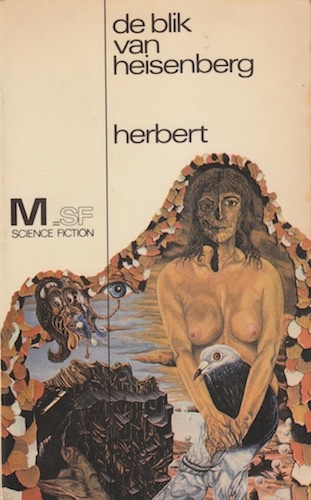 Lately I have been buying a lot of cheap second hand science fiction novels, most from the 1960s, 70s and 80s. I try to stick to writers I know of, and sometimes those books who sound interesting. What I have noticed is that most books from the early eighties and before are pretty thin, about 150 to 200 pages, whereas most book I read now are at least 350 and often more.
This is an oldy by Frank Herbert (of Dune fame) from 1966. We are many (tens of thousands) years in the future. Mankind is kept sterile and kept that way by the Optimen, prime humans who are immortal. The humans are basically slaves and pets for the Optimen. Some humans are allowed to breed, but the embryos are grown vats after being submitted to a cut, where unwanted elements are cut out of their DNA. This also cuts the bond with the parents, essentially making it that nobody has a past or a future. But then Durants appear, with an exceptionally good embryo. It seems to mutate on its own, and then it turns out that the embryo is also strangely fertile. Somehow cyborgs are also involved, working a plot against the optimen.
All in all, the basics of the story sound like it could be a very good scifi story. But all in all the book is too short. You are dumped right in the middle of it, and hardly anything is explained. You very slowly figure out where and when you are, what the world is like at that moment, and who and what is acting why and how. It could have done with a lot more world building. Now it was a bit of a jumble with a lot of interesting ideas but not a good story. Three out of five stars.