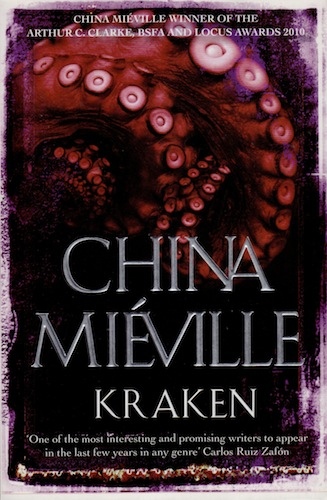 Billy works at the Natural History Museum in London as a conservator of mollusks. One evening, when he is giving a tour of the museum’s Darwin Centre next door, he discovers that the main specimen on the tour, the giant squid, has vanished, tank and all. Without a trace and without any suspicious noises or traces.
Pretty soon Billy learns that there is a lot more to the world, and especially London, than he thinks. He gets involved into the investigation of why the squid was stolen, by whom, and how to stop the apparent impending apocalypse. A lot of magic, gods and beliefs are involved.
The writing in Kraken can sometimes be a bit confusing, because such a lot is going on at any one time, all of it being very weird. However, I loved the world and history Miéville created in this book, which reminded me of Neil Gaiman’s American Gods. Miéville’s gods and magic is a lot stranger though. At the heart of it all was a good action packed mystery to prevent the end of the world. Four out of five stars.