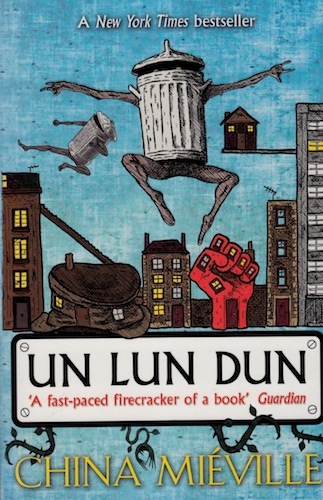 China Mieville said in an interview I once read that he wants to write books in every genre. Previous books I read by him could be classified as steampunk, science fiction or detective books, and this one is a childrens/teen adventure fantasy.
This is the story of Zanna and Deeba who discover the strange world of UnLondon, a world parallel to their London, where everything is slightly different. Giraffes are murderous predators and roam the streets. Umbrellas (unbrellas) are broken but live. Trash can be a pet. Everything is slightly weird. The people there believe Zanna is the chosen one, and they need her to save their city from Smog, sentient pollution that wants to rule UnLondon.
The book is filled with action, mysteries, funny un-things, beautiful drawings by Miéville himself and heroics. The story does seem a bit similar in premise to that of Neil Gaiman’s Neverwhere, but goes its own way and does its own thing. It is a light fun and fast-paced read, good for old and young alike.