The Departure by Neal Asher 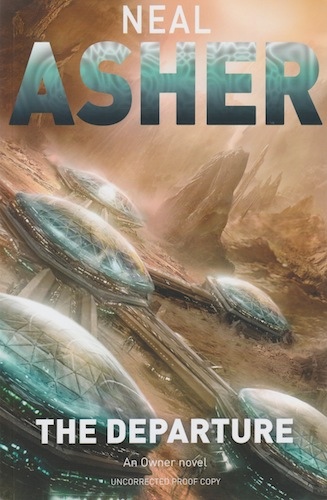 The Departure by Neal Asher is the first installment of his new space opera series, Owner. It is the origin story of Alan Saul, Owner of Worlds and how he became what I assume he will be in the later parts of the series.

It is the twenty-second century, and earth is ruled by a Director and a Committee. The population has risen by billions to unsustainable levels, and to ensure their own survival, people have given up pretty much all their freedoms. The Committee is a ruthless, all knowing, all governing, all consuming structure, that determines who lives and who dies. In this world, Alan Saul wakes up, in a box on a conveyor belt, heading for an incinerator. He doesn’t remember anything about the time before that, but he slowly figures out his potential when he is contacted by a com life living inside the successor to the Internet, GovNet. He can tap into the network using nothing but his mind, and uses this to regain his freedom.

I have mixed feelings about this book. On the one hand, I can see how Asher sets the scene for further parts in this series, and how this is just the beginning. The world Asher creates, with regard to technology and scientific development sounds realistic. On the other hand, the balance of this book was strange sometimes. A lot of time is spent explaining how the world is and how it came to be that way, either by sections at the start of each chapter, or by the characters reminding themselves. Especially that last way of describing it felt forced. Also, any deaths or attacks in the book were described pretty graphically, which wasn’t always necessary for the story itself. Lastly, the characters were a bit lifeless. Saul, Var and Hannah felt more like a type than a real person, and that made me care less about the story.

This first part in the Owner series made me curious for the coming installments, but I do think it might need those other books to really come into its own. For me, this book is now three out of five stars.