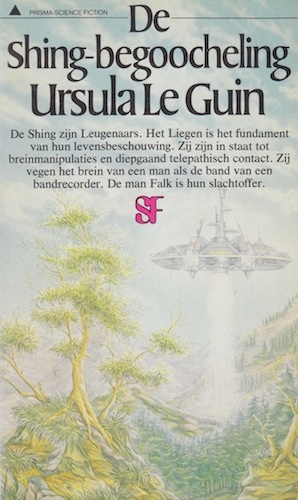 Another book in the Hainish cycle of loosely connected science fiction books by Urusla Le Guin, this one, called City of Illusions in English, is about a man who comes from a forest, remembering nothing, not even his own name. The House of Zove take him in, despite his strange cat-like eyes, and teach him about the world, Earth in the far future. Earth is controlled by the Shing, a group that is known for always lying. So how can Falk, the man, know what is true, and who is telling the truth. A group of people that say that they always lie, are they lying when they say that? Are the people from the House just rebellious and slanderous when they say that the Shing lie? Slowly Falk unravels the mystery of who he is, why he has lost his memories, and needs his whole mind to figure out what to do about his situation.
Even though this is a pretty short book (my version is only 186 pages), a lot is going on. Falk’s education, Falk’s travel, and his arrival in the city of the Shing and his mental mystery. I really liked the problems that Falk runs into, how he mentally solves them, and how the whole story comes together in the end, including the small hints that both I as the reader and Falk didn’t understand at the time. Four out of five stars.