The Monsters Inside by Stephen Cole 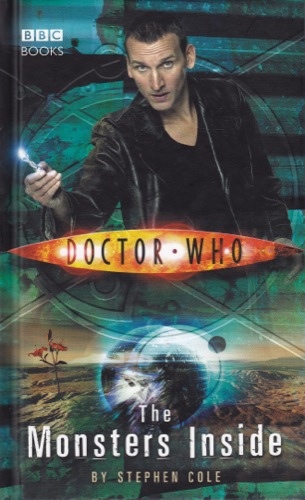 A couple of months ago I finally watched the new Doctor Who series from it’s first season (2005, ninth Doctor) up to the last episode of season six before the break, and I was hooked. I love all three Doctors and don’t really have a favorite (although bow-ties are cool). There is also a series of books that takes place in the same timeline with the same people as the show. Our library has the first and second book of the new series, so I decided to try one.
This book is about Rose and the ninth Doctor. It’s Rose’s first trip to an alien planet, and it all goes wrong in the first few pages. The Doctor and Rose get caught and separated. While they are trying to reunite, they find out that something bad is going on in this universe of justice planets.
At first I found it weird to read the thoughts and emotions of these characters I feel I know so well from the TV show. I thought that Rose was a lot more emotional in the beginning of the book than in the TV show, but then again, I may be remembering just the later, powerful Rose who has seen it all. Soon the book turned into a real Doctor Who adventure, and it was fun to see some of the monsters I knew from the TV show again. I hope to read more of these stories in the future. Four out of five stars for the fun and memories.