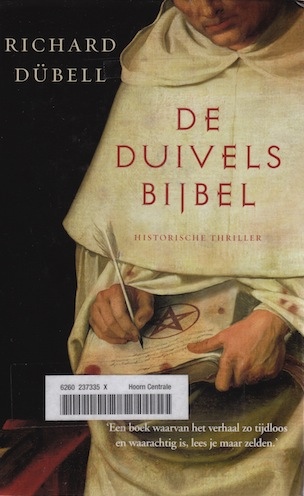 This historical novel is about the Codex Gigas, the Devil’s Bible, the largest medieval manuscript in the world. It is said this book was written by fallen monk, who was walled up as a penalty. He promised to write a book to glorify the monastery in one night, and to complete this task he asked the devil to help him. In this story this caused the book to have enormous power. Seven monks are charged to protect it, hidden away in a monastery, but many people want to find it, to unleash its power.
The book follows several characters in late sixteenth century who are all connect to the Devil’s Bible, some want to use it, some want to get rid of it, some don’t know it but their lives revolve around it. All are trying desperately to find it, and the monks are trying to prevent this from happening. The story is pretty fast paced, filled with love, intrigue, mysteries and mad kings. I couldn’t put it down, I found it original and very good. The writer, Richard Dübell, shows the backstory with some short chapters, and then just lets the story play out, leading the reader around. Not all of it is very predictable, making it a fun read that fits into the real history pretty well. Four out of five stars.