The New Penguin History of the World by J. M. Roberts 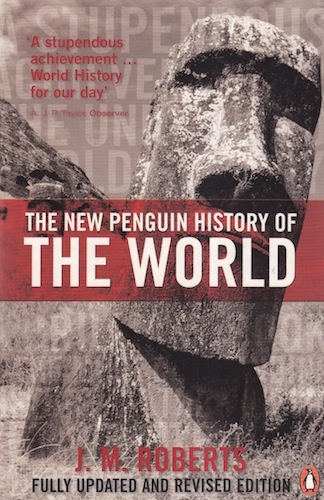 Now that I am home so much (with a bad back) I decided to start reading some non-fiction again as a second book. And why not pick up a history of the whole world and all time (that humans were on earth)? This book, the fifth edition from 2007 tries to cover everything in 1188 pages. The first edition was published in 1976, and for this edition the last part was written by Odd Arne Westad because the main author J.M. Roberts died in 2003.
The book is divided into eight parts, each covering a major period of history. The parts cover the time before history, the first civilizations, classical mediterranean, diverging traditions, the making of the European age, the great acceleration, the end of the European’s world and the latest age. The narrative is about major events in history, covering peoples very generally. While this enables the coverage of thousands of years in a little over a thousand pages, this is sometimes very frustrating. In some parts Roberts seems to go out of his way to not mention any names, presumably to not confuse his readers. Yet when I read about the German Emperor drowned in the course of the Third Crusade, how difficult or distracting is it to just say that it is Frederick Barbarossa so I can related this part in the book to other books I have read about the period. And when discussing religions it is weird that Shinto is called a sect, and all other religions are that, religions. Like the author admits in his preface, the book is very Euro-centric, covering mostly Europe and the parts of the world that now have European culture (the Americas, Australia). The Middle East and Asia become more important later on. But it is too bad that not much is mentioned about the Americas, Africa and Asia before the Europeans arrived. His reason for this is that none of the civilizations there were major, and none survived. But that doesn’t mean they aren’t interesting. The weirdest example of this is the picture on the cover of the book, of the Easter Island statues, yet Easter Island is never mentioned in the book.
This review does sound a bit negative now, and I don’t feel that way about the book. Covering such a large span of time and such a big area is difficult, and Roberts and Westad did a great job.