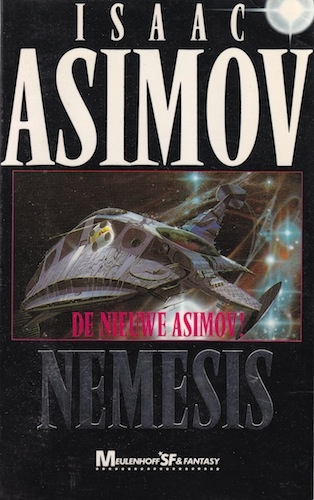 This is one of the few (later) Asimov books that has nothing to do with his major universes of Robots and Foundation, but stands on its own. The book takes place in the twenty-fourth century. Humankind has Settlements in space. These are large spaceships where humans live permanently as Settlers. They are still pretty close to earth though. One of the Settlements, Rotor, has discovered a way to travel close to the speed of light. Using that discovery they have found Nemesis, a companion star (a red dwarf) to our sun, and they travel there, in secret.
The book follows two strands of the story, one strand following Rotor, the other Earth. At its heart are the mysteries of why Rotor left, how and where they went. For Rotor it is the discovery of life near Nemesis and what kind of relationship they have with Earth. I really liked this book, because it had everything. It had difficult human relationships, leaders who try to do the best but maybe aren’t right, modern humans, strange planets, new discoveries. A great Asimov, four out of five stars.