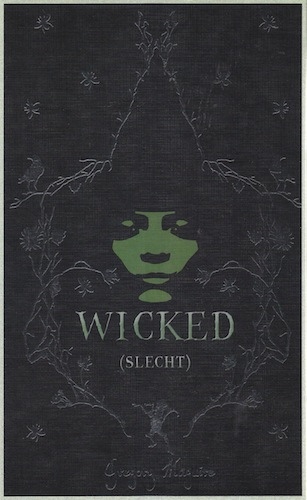 A long time ago I have seen the famous movie The Wizard of Oz. I remember of course Dorothy, Toto, the lion, the tin man and the scarecrow, the yellow brick road and Emerald City. Other than that, not much, and I have never read the book by L. Frank Baum that was the inspiration for the movie. But, I didn’t really need to remember a lot to understand and enjoy this book, Wicked, the story of the Wicked Witch of the West, how she came to be that way.
The book covers the life of Elphaba, her birth in Munchkinland, her difficult youth on account of her being green, her years of study in Shiz and her later years. The Wizard of Oz is an evil man, a dictator who removed the Ozma regent to rule Oz, and Elphaba is part of the resistance against him. But she pays a high price for her resistance. The novel is an exploration of evil, how do people become evil, and who is evil. Is the Wicked Witch of the West evil? Is the Wizard good? And if so, why? Faith plays a big part in the novel, as well as how different races should live together.
I found the book ok. The story was very interesting, but for me, it didn’t need its relationship with the original Oz stories. Sometimes it felt forced, especially the ending when Dorothy appeared on the scene. The story ended pretty quickly, abruptly after that, and to me it didn’t feel right, keeping in mind the 450 pages before that. It was an interesting read, but not brilliant. Three out of five stars.