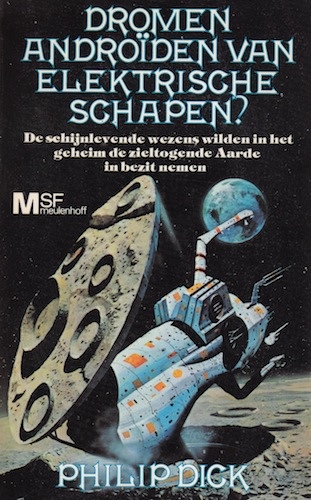 How can you tell if the science fiction book is old?
In this case, if the story takes place in 1992, the far away future. This copy of Do Androids Dream of Electric Sheep? was my dads, and was published in 1977. The story is about Rick Deckard, a bounty hunter hunting for androids, and John Isidore, a man affected by the fallout and considered special. The world is earth, after a great world war. The fallout is very damaging, both to humans and animals, and humans are encouraged (by receiving a free android) to emigrate to other planets. Hardly any animals have survived and it is a task and a status symbol to care for a living animal, the bigger (and rarer) the better. Deckard has an electric sheep, unable to afford a real sheep, and unable to admit this. The book covers one day, in which Deckard must hunt down six androids of a new, more human, type. The book covers his difficult choices and experiences, both covering androids and animals. John Isidore, a special, shares some of the experiences, but looks at them from a different point of view.
Even though the book is very short for todays standards (202 pages in my edition), it covers a lot of topics concerning ethics, religion, love and empathy. I would love to have had more of the story, then again, now that it is so short it helps you think about it. Four out of five stars.