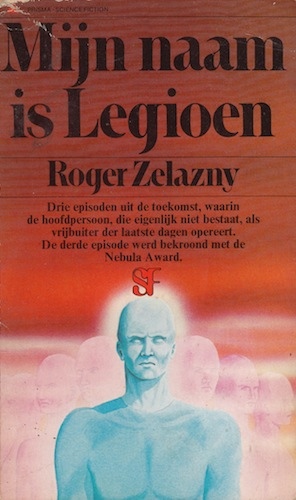 This is another book from my father’s classic scifi collection, My Name is Legion by Roger Zelazny. It contains three stories (the last one, Home is the Hangman, won a Hugo and Nebula ). All stories are told by the same (unnamed) character. He was involved in the creation of a global super databank in which all data about people is contained, their personal information, their travels, their finances, their psychological tests. Because he had his doubts he erased himself from the system and created a backdoor, enabling him to create and erase identities for himself as he wishes. Because he has no legal way to make money, he hires himself out as an investigator of suspicious happenings.
The book takes place in the future, but not very far out, and the world described is not much different from our own. Only in the last story, about an AI robot/machine, a lot of Science Fiction (about space travel) is alluded to. The rest read more like investigative mysteries. The book was an alright read, but not that special. Three out of five stars.