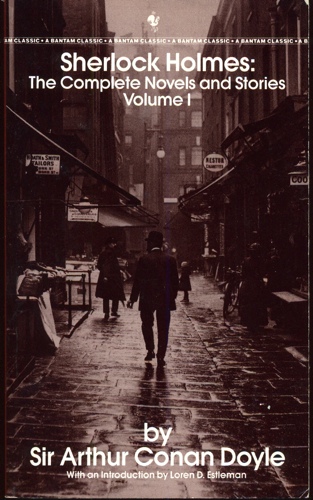 After watching (and loving) the last Sherlock Holmes movie, and the BBC TV show Sherlock, I just knew I had to read the novels and stories. I have had these books for years, so I finally started. This volume contains the novels A Study in Scarlet, The Sign of Four, and the story collections Adventures of Sherlock Holmes, Memoirs of Sherlock Holmes and The Return of Sherlock Holmes. There is not much new I can say about these stories that hasn’t already been said before.
I really liked these stories, and the writing. I love Sherlock for his anti-social behavior, his character, his way of doing things. The cases described here (except for the novels) are pretty short and sweet, making them nice quick reads. Because the stories are so short it matters a lot less that there is a lot of repetition in the stories. A lot of hidden identities, murky histories in far away lands, and generally a lot of story-lines that are very familiar to me, a reader a 100 years after the stories have been published. But if you read them keeping in mind when they have been written, what people read then, they are great stories, and still very enjoyable.