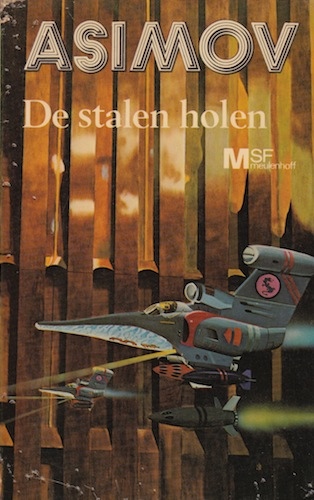 Ever since first reading some of Asimov’s works last year I try to find more of his books, as I have liked all of them so far. This one comes from the collection of my father, who had a lot of seventies/eighties science fiction. De stalen holen/Caves of steel takes place in the Robot universe. It’s far in the future, and due to over-population humankind lives in huge cities that are closed of units. They don’t breath outside air, or see the sun. Food, living space, everything is rationed. But it wasn’t always like this, in the past humans went out and colonized thirty planets. Now they (called the Spacers) are back, and are trying to help Earth out of their steel caves, because this way of life will mean the end of humanity on earth. In this world, a murder of a spacer takes place. This could mean a retaliation from Space against the Earthlings, so it is very important that it is solved.
The book is from 1967, and it does show it age in some ways. The over population in the book? Eight billion people. We are at seven billion right now. Some of the technologies pictures being in use three thousand years from now are already ancient to us. But we can’t blame Asimov for that. If we look past that, it is a very good book with an interesting murder mystery. The exploration of the impact of robots, and humanoid robots is very interesting to read.