The Art of Camping by Matthew Abaitua 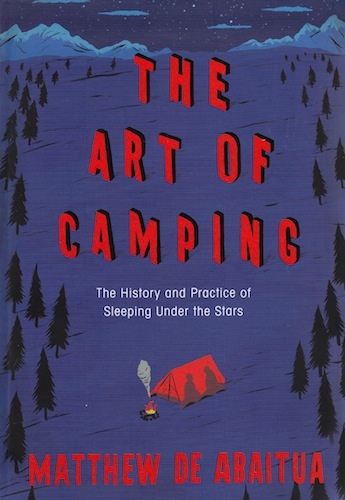 I won this book from Penguin on Twitter, and because this year will be the first year I will go camping by myself (with my boyfriend, without parents) after years of car/hotel-vacations I was very interested in this book. This book tells two stories; anecdotes about the camping life of the author and his family, and the history of camping in England.
That made the book a bit mixed. The chapters are divided into chapters dealing with all the aspects of camping (packing, pitching, campfire, campsite, the tent, and striking camp), yet the story concerning the history is told chronologically. This made the set up a bit artificial. However, the history of camping (in England, mainly) was very interesting. From men conquering the wild, to boy-camps to build character, to politically charged camping groups and the unfortunate relation to the Hitler Jugend, to car-camping with Henry Ford and the domed tent.
I feel that I would have liked the book much more if the anecdotes and the history would have been two separate books. The anecdotes were nice, if repetitive, and get three stars, the history was very interesting and told well, and would have gotten four stars. As it is now, the book for me is a three star book.