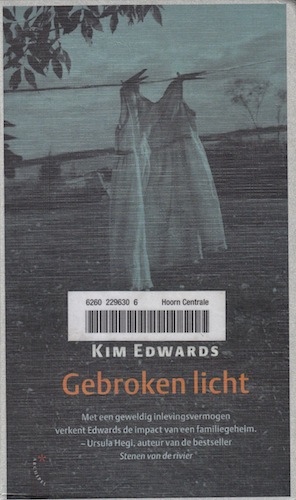 Kim Edwards got the idea for this story from a pastor, who told her about a man who found out later in life that he had a twin brother with Down Syndrome that had been sent to live at an institution without him (the brother) knowing. When he found out the brother in the institution had died. In this story Kim Edwards explores what having this kind of secret does to a family.
It’s 1964, a cold winter night, and an orthopedic surgeon, David Henry, and a nurse, Caroline Gill, are the only two people in a local hospital present to deliver the baby of the surgeon’s wife, Norah. The baby boy is early, but healthy. Then another baby comes, his twin, a baby girl. But she turns out to have Down Syndrome. Because David has grown up with a sickly sister, he wants to spare his wife and baby boy the pain, and gives the baby girl to Caroline to put in an institution. Arriving at the institution Caroline can’t bear to leave the child, and to give David a chance to do the right thing, she takes the girl. But David tells everybody the girl died, and Caroline raises her as her own.
The book describes different periods in both children’s lives, from 1964 to 1988, and explores how the secret of the girl’s, Phoebe’s, existence affects everybody in the Henry family and Caroline Gill herself. While tragic, it is a great story to read. I couldn’t put it down and read the whole thing in one long stretch. I loved the descriptions, and those in the family trying to do the best they could. The way Edwards tells the story from different viewpoints I felt sympathy for all characters, even David. Even though it was wrong, he tried to do the best he could.