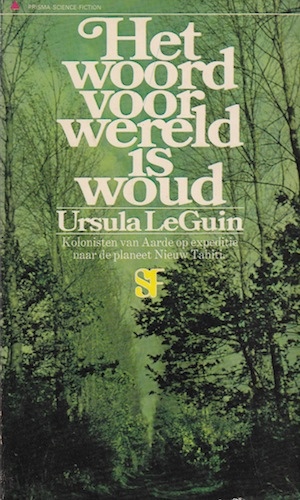 I was attracted to this book by its title, which in English originally is “The Word for World is Forest”. Very powerful. The book, containing one long story (the title story) and two short ones (Nine Lives and The End). The long story is about the colony-planet New Tahiti, a planet of islands covered with rainforests. Humans from Earth, a planet that has destroyed all its wild- and plant-life, are colonizing the planet by preparing the islands for farming. They are cutting down the trees, and shipping it to earth where wood is more valuable than anything. But on New Tahiti there are also humans, humans that have evolved slightly different, but they still see themselves as humans. They are small, hairy, and they know how to dream. The story describes the depressing consequences of (earthly) humankind trying to change a planet to suit them, without regard or respect for the local flora and fauna. The other two stories deal with a ten-person clone (all from the same human) and his/her life, and with the end of the world and how to escape it.
While the main story is pretty depressing, it is a good one. So are the other two. I really liked the writing and imagination here.