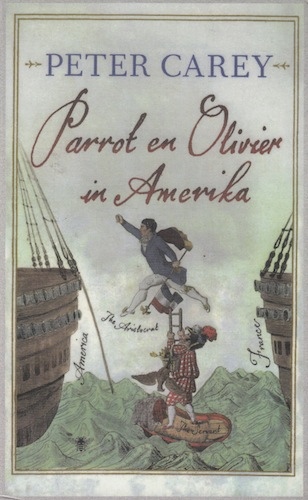 This Booker prize nominated book is about the France nobleman Olivier, who is caught up in the various revolutions going on in France in the early nineteenth century, and the man Parrot, a servant and artist from England who has had his own strange life. Together they travel to America. The book describes their early lives, one as a noble in a sort of exile from the revolution in Paris, the other a boy from the moors in England, caught up in the war between France and England. They meet when Olivier is sent to America to investigate their prison system, and Parrot is sent with him as a servant.
The book covers (without flashbacks) a relatively short period of time in which both Olivier and Parrot have to change a lot. Olivier has to realize that nobility is losing its automatic power, and Parrot has to determine what he wants in life, and do everything to reach that goal. I loved the writing, the switches from Olivier to Parrot and back. Both characters have something exasperating about them, but are also pretty likable. A very nice tale.