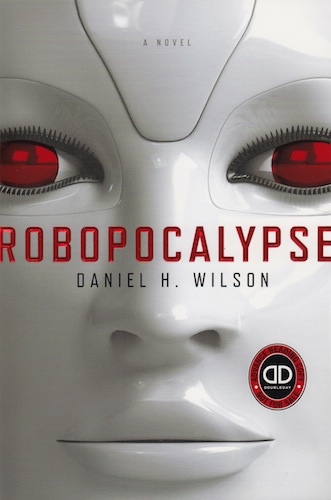 Robopocalypse is the much anticipated robot dystopian novel by Daniel H. Wilson. Anticipated so much that Steven Spielberg is already making a Robopocalypse movie to be released in 2013. But does it live up to the hype?

In Robopocalypse, we are some time in the future. Robots are a part of daily life. There are service robots to help in the household, computers in cars preventing accidents, robot toys, robots in factories, hospitals and the army. But at one point, we go to far, and the robots turn against us with ruthless precision. Slowly we realize that robots might not be as trustworthy as we thought. Then, one day, it’s Zero Hour and the New War starts.

The story is described by Cormac Wallace, a surviving warrior, after the war has ended. Through the eyes of some of the key players of the war, the events are described. The manner in which this is done is very much like what Max Brooks did in World War Z. The difference, besides the fact that we trade zombies for robots, is the distance between the main narrator and the events described. In Robopocalypse the narrator is one of the main characters in the war, and the events described have just ended. Eyewitness accounts of short amounts of time before, during and after the war, together form the whole story. We as readers get to take a glimpse into what is happening, but because the characters don’t know the full story, neither do we. Only the personal comments of Wallace give a bit of context as to why he has included the fragment. Throughout the book we follow the same groups of characters, sometimes families, sometimes loners who in turn affect the stories of other characters.

I loved the book. The writing was truly scary, especially when the first attacks are being described. I was reminded of the movie Maximum Overdrive, and I was glad we are not living in that world (yet…). The book covers the US mostly, with one character in Japan, and one in the UK. Other than that, there is not much being said about the rest of the world. After finishing it I wanted to know what happened in South America and Africa. For example, was Africa as developed robot-wise as the first world, and if not, what happened there? One of the things I don’t care for in books, and what Wilson did here, is the use of flash forwards. In the book, Wallace ends each chapter with a short description of what happened next, for example in the form of “This would turn out to be a turning point.”. After a few chapters ending like this I was annoyed about it, I want to find these things out for myself. And if the writer won’t describe these things, maybe he should. But that was really the only flaw I found in the book. Of course, some things were a bit unrealistic, some reactions by the characters were very hero-like, but all in all, it was a very entertaining and good book. I hope this and World War Z cause this genre of eyewitness account books to become more popular so we can read more books like this. For me, this book was four out of five stars.