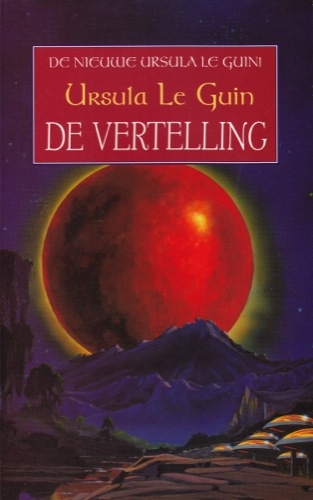 With all the science fiction reading I have been doing this past year, Ursula Le Guin is a writer I could no longer ignore. I really wanted to read The Left Hand of Darkness, but the book was a bit too expensive and the library does not have it. But they did have De vertelling (The Telling). After starting the book I found out this is part eight in a loose series/universe, but that didn’t affect my reading that much. I think the parts of this series are related to each other like those in The Culture universe by Iain M. Banks, which means that while you will enjoy the book more if you know the other parts, you can still read it by itself.
In this story Sutty, from an earth in the future, is sent to the planet Aka to study and observe. However, while she is in transit, something on the planet changes and she hardly has any access to the history of the place because a new totalitarian regime has taken over and destroyed all books, and prohibited history. During the period she is there she finds out more and more about the history, which may give her a key to fixing the relationship between earth-people and Aka.
It took me a bit to get into this story because Le Guin doesn’t give too much of a back story (maybe because of the previous parts). But after getting into the story that didn’t bother me too much anymore. The story itself was very good, because the reader gets to discover Aka along with Sutty. A nice introduction to Le Guin, four out of five stars.