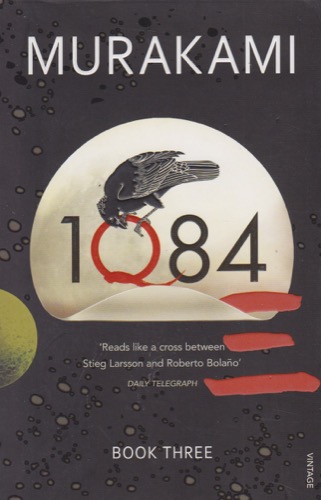 Part three of 1Q84, which is really one novel which has been split up into three books (for the Dutch market). After the cliffhanger at the end of part two, this brings the story to a (Murakami) conclusion. Both Aomame and Tengo find out more and more about the Little People and the two moons, and the world of 1Q84. And a third character is given his own chapters in this part, Ushikawa. I won’t describe more of the plot here, because I feel that discovering the world that Murakami created in 1Q84 is what is best about this book.
Now, how did I like the story as a whole. I have read reviews of people who thought this story was a bit too strange. I think it is further out there than most Murakami tales, but for me, it did have the same atmosphere to it. True, this has even more of a magical realism feel, the characters are in a different world altogether. But what I like about Murakami, and about this book, is that the world is only slightly different from hours, and just like us, the main characters have to discover for themselves what it is, and what it means. I have also read that people didn’t care for the characters of Aomame and Tengo. I didn’t agree, I did care for them and really wanted to know what the ending of their story would be. And that’s where the book doesn’t quite deliver. I am not saying it is bad, but the ending is not quite a clear ending. This story is over, but it might be followed by more adventures. Who knows? But that is also part of the charm, this way the characters stay with you. After reading it all, all I can say to Murakami fans, is: get this book as soon as you can.