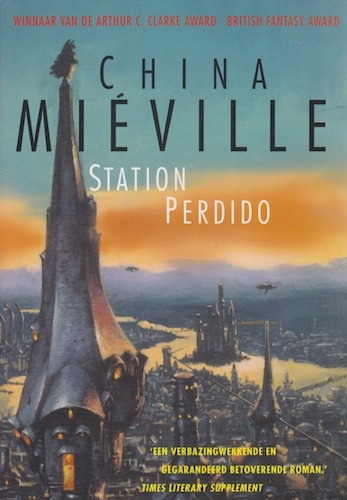 After my first experience with Miéville (The City & The City) I wanted more. My library had this book, so I decided to try it, knowing before beginning that this would be different from my earlier read. It took me a little while to get into the story, to get a feel for the world this all takes place in. The main location is New Crobuzon, a city dirty with industry and build full of houses and hovels. I picture it black and grimy. In it live several different species, one of which are the humans (who do seem to be at the top, at least, I think the mayor (a dictator) is a human) but also humanoids. The species themselves are pretty out there, one of the main characters is a humanoid female with a scarab for a head, you have cactae (yes, cactus-humanoids), garuda (human birds) etc.
The main event in the story is the release of some horrible creatures in the city, threatening every humanoid species and possibly leading to the end of New Crobuzon, or the world entirely. The main characters feel responsible and try to fight it, using some really funky science.
The story has so many elements to it. You have the world full of strange beings. You have the depressing dystopia of a polluted city and a ruling dictator (complete with militia, censorship and torture). You have the multiple dimensions. The weird science. And regular human(oid) emotions. This all made it a great read, though sometimes I think it was a bit too much detail (like the description of the dead bodies without eyes that wash up from the river). But then again, the detail did make the story come together and I felt immersed in it.
Great read, and now I really want to find the other Bas-Lag books somewhere. Four out of five stars.