A Clash of Kings by George R. R. Martin 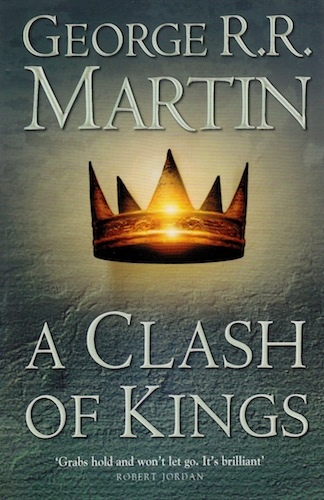 This is the second book in the Song of Fire and Ice series. After reading the first I just had to read more from this saga.
The book picks up right where the previous one left us. The king is dead and war is going on. Robb is king of the North, the old kings brothers are fighting with Joffrey for the throne, and other Lords and knights feel they should sit on a throne. Meanwhile, winter is coming and in the North the free men are stirring.
This book has some more fantasy elements in it, but they are introduced slowly, and are as unbelievable to the characters as the reader. I loved reading the book despite the tragedies, death and hardship the like-able characters face. Near the end I thought that I had enough of this saga for a while, but now that I have finished the book I want to read the next one really soon. Luckily it is waiting for me at home.