The Lost Hero by Rick Riordan 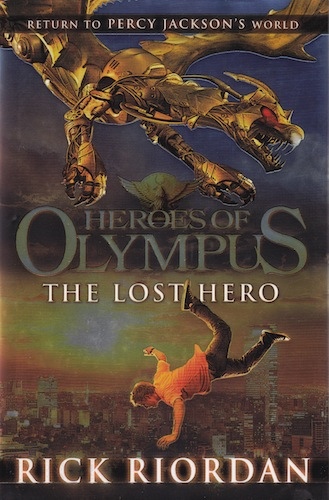 After speeding through all Percy Jackson books this summer, and thoroughly enjoying The Red Pyramid this fall, I was happy to know that there was one new book by Rick Riordan waiting for me. And this Christmas my grandmother gave it to me. This book, The Lost Hero is the first book in a new series, The Heroes of Olympus. But it is also a continuation of the Percy Jackson series, as this takes place in that world, and some of those characters are also present here.
The book takes place just after the war in the last Percy Jackson book. Three new heroes are found, but Percy Jackson is missing, and a new quest is to be undertaken as a new war is stirring. This book was bigger than the Percy Jackson one, and seemed to go more into depth about the quests, the heroes and the mythology. It was a very enjoyable read that I couldn’t put down. To bad I have to wait until next fall for part two to be released.