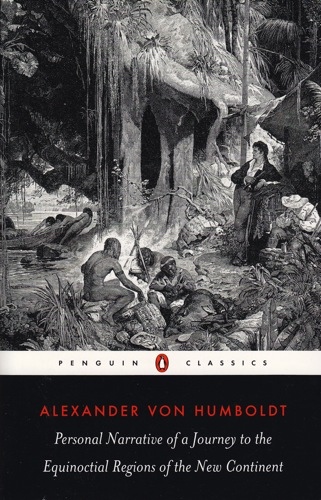 Last year the Dutch public tv company VPRO made and aired a tv-series where they followed in the tracks of the Beagle and Charles Darwin. Every episode scientists, historians and relatives of Darwin would discuss the area they were in at that moment and how it was fairings now, 200 years after Darwin first passed through. Along on this journey came the travel writer Redmond O’Hanlon with crates of his books. During the journey he read from these books, which were travel journals and reports from the nineteenth century (along with a first edition of Darwin’s Origin of Species!).
This inspired me to read some of these travel books, and the first one I picked was Alexander Von Humboldt’s Personal Narrative of a Journey to the Equinoctial Regions of the New Continent. In it he describes his journey to South America (mainly current day Venezuela) via Tenerife. He explores the Orinoco river system, looking for a link between the Orinoco and the Amazon. He describes and collects flora and fauna along the way, but also writes about the native tribes and the many missions they stay at.
I read the 1995 Penguin edition by Jason Wilson, which has been heavily cut down. I read some original chapters online through the Gutenberg project, and all I can say is that I am glad I read this abridged version. In the original version Humboldt writes in length about all his measurements and the geology. All very interesting I am sure, but what I wanted was a description of his journey and the wonders he sees, and that is exactly what the Penguin edition gives me.
A very interesting read, from an early explorer. It has wet my appetite and I do want to read more in this ‘genre’. Four stars out of five.